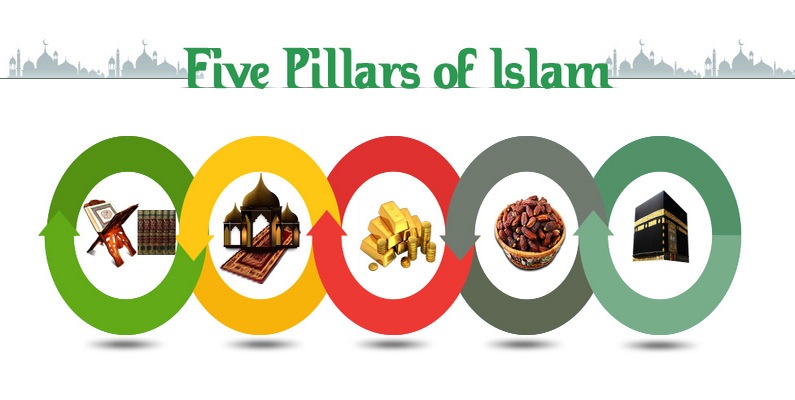 Islam is a religion of peace, prosperity, affection, kindness, sympathy, and sacrifices whose building stands and based on the five sacred pillars. One who believes and practices upon these pillars is the true meaningful Muslim. The pillars of Islam are the framework of the  Muslim life. They are the Shahadah (Testimony of Faith), Salah (Prayers), Zakat (Charity), Sawm (Fasting) and Hajj (Pilgrimage). Each pillar carries immense significance and obligatory upon the financial and physical capability of a believer.

In accepting Beloved The Prophet Muhammad صَلَّی اللہُ تَعَالٰی عَلَیْہِ وَاٰلِہٖ وَسَلَّمَ as the “Last of all Prophets عَلَیْہِمُ السَّلَام we Muslims believe that His Prophethood confirms and completes all of the revealed messages, beginning with that of Prophet Adam عَلَیْہِ السَّلَام. As it is mentioned above that each pillar is obligatory according to the financial and physical capability of a believer but this is the pillar which is mandatory and essential to follow because without testifying and admitting Shahadah from heart no person can become a Muslim. That is why it is prohibited in Islam to force someone to accept Islam unless he wants to do it with his own will and he can only enter into the fold of Islam by testifying and admitting the words of Shahadah.

The second pillar, the five daily prayers signifies the believer’s submission to ALLAH عَزَّ وَجَلَّ and shows as public, physical evidence of the believer’s adherence to Islam. This is the most important pillar of Islam after Shahadah and every sane male and female Muslim must perform five prayers as per the time prescribed by Sharia. Muslims must wash before every prayer, which is called Ablution (Wuzu) and it is also mandatory to do ablution properly. The names of the five prayers are Fajar, Zohar, Asr, Maghrib, and Isha. The Fajar prayer is performed before sunrise, Zohar is performed in the midday after the sun has passed its highest point, Asr is the evening prayer, Maghrib is the evening prayer after sunset and Isha is the night prayer. One must offer prayers at their specific times. Through the prayers, a Muslim maintains his relationship with ALLAH عَزَّ وَجَلَّ, comes to remember Him often and avoids falling into sins.

Zakat or Almsgiving is the third pillar of Islam and it is mandatory on every Muslim who is financially strong and has income which is equal to the amount prescribed by Sharia (Nisaab) besides his expenditures. The the amount is set at one-fortieth or (2.5%), of the value all owned by a Muslim. The purpose of Zakat is that wealth should not only circulate around rich and needy persons can satisfy their needs with Zakat. This will create a balance in the society and eliminate poverty gradually. On the other hand, the rich should not think that they are doing a favor on poor people by giving them Zakat whereas they are completing their obligatory act as per the commandment of Almighty.

The fourth pillar of Islam is Sawm (Fasting) in which Muslims have to fast in the sacred  month of Ramadan. The believer is supposed to refrain from food, drink and sexual activity during fasting hours. Fasting is necessary for every Muslim that has reached puberty. The goal of fasting is to increase one’s piety and also to experience the pain and hunger experienced by the poor, needy and helpless. Apart from that, this is also a great exercise for the human body as we eat useless things all year and by observing fast, we can improve our digestive system. In the sacred month of Ramadan, prices decrease in the global markets to facilitate Muslims in this holy month.

The fifth pillar of Islam is Hajj (Pilgrimage) which offered in the month of Zul-Ḥijjah to the holy city of Mecca. This is a journey of hardships and Pilgrimage to the house of ALLAH عَزَّ وَجَلَّ is mandatory for every Muslim who is physically and financially capable of making the journey and to complete the prescribed rites required to make a Hajj. One who has completed the journey of Hajj is called a Ḥaji. Till last year, more than 2.5 million Muslims visit Makkah to perform the sacred worship of Hajj and that is why Hajj is a visual proof of the brotherhood of humanity and their equality in servitude in front of ALLAH عَزَّوَجَلَّ.